Subaru has faced all the evil forces that had planned to take him down. But his biggest adversaries have been the ones that have played with his mental faculties. He may have been able to triumphantly get over them, but Emilia is struggling to face her past.

Subaru has faced all the evil forces that had planned to take him down.  But his biggest adversaries have been the ones that have played with his mental faculties. He may have been able to triumphantly get over them, but Emilia is struggling to face her past. 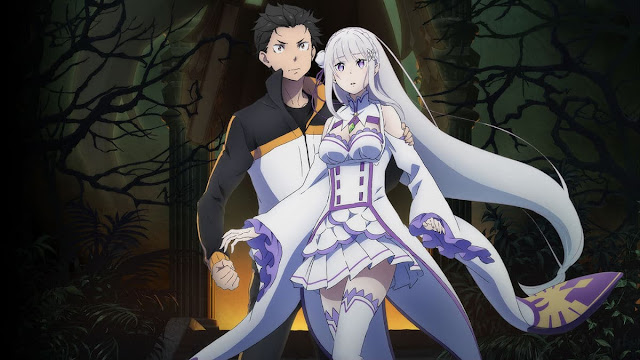 Subaru is grateful to Echidna for giving him the opportunity to have a tête-à-tête with his parents. However, he also tells her that because of the lack of space he couldn’t capture the personalities of his parents properly. Echidna again catches him off guard and tells him that he has only passed one of the three graveyard trials. Subaru stands his ground and thanks her again for giving him the opportunity with his real parents.

While Otto, Ram, Subaru and Garfiel are having a discussion, with Emilia fast asleep, Otto has an idea. He asks others why those unaffected carry through the mixed-blood residents. But Rayzu the creepy-elf immediately comes and clears the air that when mixed-bloods cross the blockade, they end up dead. Which makes Otto’s plan look suicidal and stupid.

When later Emilia wakes up she finds Subaru by her side. In the spur of the moment, she holds his arm and tries to come closer to him only to immediately retreat back after realizing that she was showing fondness towards him. Even though she is obviously drowsy, Subaru lets her know that she can try the Trial later that evening if she wants to.

Later, the next day Subaru is informed by Ram about the possible plan to assassinate Emilia. She tells him that there are people in the Sanctuary who are so against the barrier coming down that they can even kill off Emilia in order to stop it from happening. Ram seems very unsure about who exactly the culprits might be as she names Garfiel, Ryuzu and Frederica as possible assassins. While Emilia tries the Trial she fails again.

Subaru is told by Roswaal that he was behind the Witch Cult’s attack on the manor and because of that, he had already disappeared before the attack. Roswall tells Subaru that it was planned so that he and Emilia can turn the tables and win the trust of the villagers. Subaru is naturally infuriated as he was not expecting something like this.

Roswaal’s confessions help clear some of the unexplained elements of Season 1 like the reason for Witch Cult’s freedom to cast torment. Roswaal was of the opinion that Subaru would be able to emerge victoriously. But nevertheless, Subaru keeps these revelations with himself and the next day goes to help villagers who wish to cross the barrier. Later that day with his guts spilled out, he comes face to face with Elsa.

After getting to know about the possible assassins of Emilia, Subaru can hardly trust anyone and is left on his own as he has no one to trust. He is in a spot. It will be interesting to see how he is able to get out of the troubles.