Tomura Shigaraki has always wanted to make a name for himself so that he can prove his worth and avenge past wrongs done to him. He detests the current world order and aspires to bring it down. The central antagonist and the archenemy of All Might, Sensei (All for One) has put his trust in

Tomura Shigaraki has always wanted to make a name for himself so that he can prove his worth and avenge past wrongs done to him. He detests the current world order and aspires to bring it down. The central antagonist and the archenemy of All Might, Sensei (All for One) has put his trust in Tomura and wants him to be his successor. Just like All Might gave his Quirk, One for All to Izuku Midoriya (Deku) so that he can become the next symbol of peace and his successor. But it is a little ironic that even though both Deku and Tomura are set on a path to confront each other someday, they don’t fight head-on for a long time. However, this is something that is good for Deku since he inherited his Quirk from All Might so late and therefore has little control of his powers. 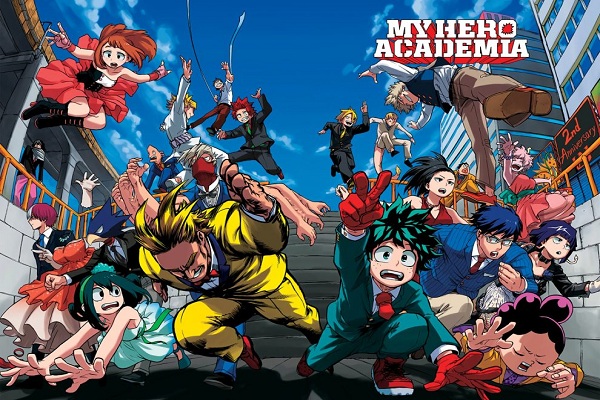 But this time, the stakes are high as the Heroes face the forces of Tomura Shigaraki in a life and death fight. Heroes like Deku, Endeavor, Aizawa, Manual, Rock Lock, and Bakugo are giving everything to stop the sinister plans that Tomura has unleashed over the Jaku city. Even though they have been successful in temporarily controlling his All for One and Decay Quirks but that is still not enough as they are having a hard time keeping him down. His new synthetic body created from the Nomu experiments that happened at the beginning of the show is very resistant and hard to get rid of. After a long struggle, both heroes and Tomura stand all bruised and beaten, but none of the two wants to give up the fight.

The battle takes a gruesome turn when Deku and All Might’s mentor – Gran Torino is killed. His death won’t be easy for Deku to fully grapple with since he guided him for a long time. Although when Nighteye died, Deku did go through the struggle of contemplating and registering the loss of a loved one. But yet that was not precisely like Deku’s relationship with Gran Torino. To compare both of the events will be inaccurate since he got to spend very little time with Nighteye.

My Hero Academia #281 opens with Tomura explaining how society has become corrupted for the false sense of protection that the heroes provide. He believes the system that the heroes have created is corrupted. He detests the fact the system has always rejected him and treated him as less than a human. So, he has vowed to reject and destroy the system as well the society built upon it. Someone like Tomura Shigaraki is too demoralized to negotiate with; the only option is to confront and defeat them.

Tomura uses the time he spends explaining his ideology to recover and immediately attacks him with a flurry of blows, hoping to catch him off guard. But Tomura is able to dodge his attacks with a grin on his face. Gran Torino sees this as a chance to attack him so he slams Tomura into the dirt with all his strength and then tries to leap off him as quick as he can but unfortunately, he is not quick enough. Tomura catches Gran Torino, and his grip is so severe that his leg gets crushed. Deku too far away to do anything for his mentor shouts, but in a blink of an eye, Tomura punches Torino through his chest as the heroes watch the horror unfold speechlessly. Deku can’t fathom what he has just witnessed as he is moved to tears.

Gran Torino is his last moment thinks about the time when Nana Shimura had left her son with another woman. She had declared after that, that she had no son as this was the only way she could probably protect his son from his archenemy One for All. Her decision was not easy to take, but that was something she did believing it to be the right thing for his son’s well-being. Gran Torino wonders if that was the right thing to do or not, but he is never able to come to any conclusion as his life slips away.

Gran Torino’s death is a huge loss, but the heroes have no time to think since they are themselves in bad shape. They still have to fight the villains and most importantly, finish off Tomura, who is still standing. Torino’s death has put a fire in Deku as he resolves never to forgive Tomura. But Tomura is unphased by such warnings as he retorts that he will never forgive anyone.

For Deku, the crime that Tomura has committed is unforgivable, and his determination is stop knows no bounds. In the past, whenever Deku has resolved to do something, he has always been able to do it sooner or later. No matter how much the stakes are up against him, but that is irrelevant for him. He always finds a way, and that is why Tomura has made a huge mistake by making it personal for Deku. Irrespective of how strong his Quirks, All for One, and Decay make him, Deku will find a way. Tomura’s end is near, and he must prepare for Deku’s relentless pursuit of avenging his mentor’s death.

John Smith has diverse interests that range from writing to video games. She has always had a strong passion for writing. She likes to write about games, tech events, security, and whitepapers. Her vast and varied knowledge aided by her supreme writing skills, have made her a powerful writer at office.com/setup.

Elements That Improve Your Ecommerce Site, Besides Design