On 22nd September 2020, Mozilla introduced Firefox 81.0 in a stable channel, and now it is available for all the users. You can start updating to the newest browser version now. The previous version of these updates majorly focused on the privacy and developer-centric features. But with th

On 22nd September 2020, Mozilla introduced Firefox 81.0 in a stable channel, and now it is available for all the users. You can start updating to the newest browser version now. The previous version of these updates majorly focused on the privacy and developer-centric features. But with the latest update, you get to use more benefits than that based on your location. 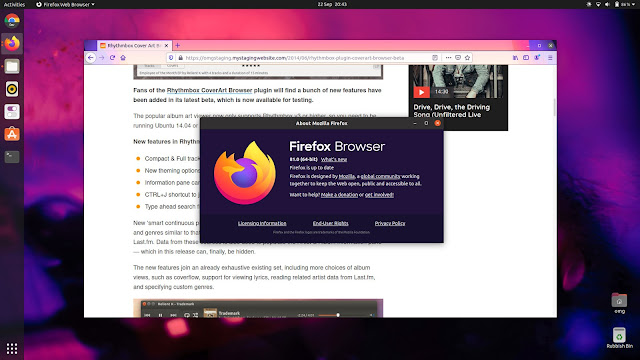 For the US and Canada users, Firefox enables you to now save, manage, and auto-fill credit card information, making shopping on Firefox ever more convenient. Since Firefox supports AcroForm, it will soon allow you to fill in, print, and save supported PDF forms and it has also given a fresh look to the PDF viewer. Firefox users in Austria, Belgium, and Switzerland using the German version of Firefox can now find the Pocket recommendations on their new tab. In addition to Firefox’s new tab, Pocket is also available as an app on iOS and Android.

This update is not limited to only adding and tweaking a few features; alternatively, Mozilla has introduced a new theme to Firefox 81. In addition to the default, dark and light themes, the latest update has now revealed the Alpenglow theme on Firefox. This theme has a colorful appearance for buttons, menus, and windows. Update your Firefox themes under Settings or Preferences to enjoy all the benefits. To be accurate, this theme is Firefox’s fourth built-in theme, and it has a little bit of black, pink, and purple colors. You can apply this theme from the Tools section. On Tools, click on Add-Ons, and select Themes to choose the latest one.

The 81.0 version also focuses on enhancing the User Interface (UI) elements and User Experience (UX) on the browser. Looking through the timeline, Firefox has received its last UI framework in 2017, which was known as “Photon.” But the PDF component on the browser never got an update from the new UI; it has remained constant in all these years. With this new update, you will find a better look at the PDF component.

Overall, the theme is the new significant addition in the Mozilla Firefox browser. Along with that, Mozilla has also introduced the feature from where you can pause and play any audio and video on Firefox directly from your keyboard and headset. It is meant to give you easy access to control your media, especially when you are surfing through another Firefox tab, program. This feature is accessible even when your computer is locked. Moreover, you can surf the internet on the browser without worrying about security threats. This update has fixed all the security patches to prevent any loopholes in the browser. The next browser update (Firefox 82.0) is expected to be released by the end of October.